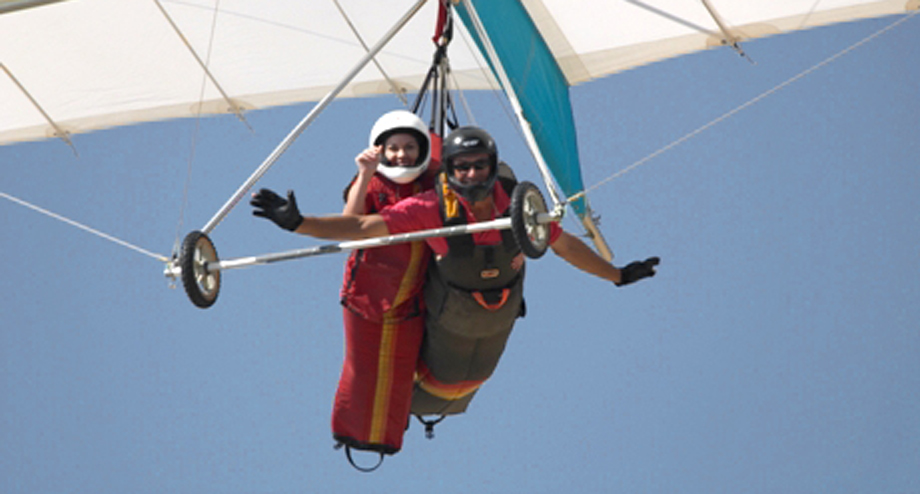 Hang gliding is an air sport in which a pilot flies a light and non-motorized foot-launch aircraft called a hang glider. Most modern hang gliders are made of an aluminium alloy or composite frame covered with synthetic sailcloth to form a wing. The pilot is ensconced in a harness suspended from the airframe, and exercises control by shifting body weight in opposition to a control frame, but other devices, including modern aircraft flight control systems, may be used.

In the sport’s early days, pilots were restricted to gliding down small hills on low-performance hang gliders. However, modern technology gives pilots the ability to soar for hours, gain thousands of metres of altitude inthermal updrafts, perform aerobatics, and glide cross-country for hundreds of kilometres. The Fédération Aéronautique Internationale and national airspace governing organizations control some regulatory aspects of hang gliding. Obtaining the safety benefits of being instructed is highly recommended.

Hang gliders have been flying at Torrey since the mid-1900’s. We typically fly tandem hang gliders in the Spring, when the winds are stronger.

Hang Gliding has been around much longer than paragliding. It is based on an internally-supported, rigid wing with a control bar that gives the pilot very direct and immediate control over the flying surface. It is a more active style of flying since the pilot must also be handling the wing.

Learn to Fly.
Get your pilot's license.
Flight School & Clinics

Check the weather for flying or dining.